As an author, my experience with Hollywood has been almost completely the opposite of 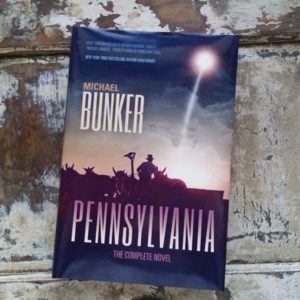 what I’d been warned it would be. I suppose it is understandable and probably necessary that their be ample warnings about the movie biz. By all accounts Hollywood (and by “Hollywood” I mean the visual entertainment industry) can be a treacherous and cut-throat kind of place. They make movies about how crazy and carnivorous Hollywood is. Before I sold the film option to Pennsylvania this past November, I’d had a few minor brushes with Hollywood. Some interest, a call here and there on different stories or projects. Just bumps in the night really, nothing concrete or earth-shattering. Still, I’d heard all the horror stories. I’d watched author friends have both good and bad experiences, and I’d read stuff that’d make you curl up in ball and suck your thumb. But beginning in November (of 2015) I started down this road myself… not exactly a road A maze really… of seeing Pennsylvania make its way to the screen (Lord willing.)

For all the background on selling a film option, read my take on it here.

Since then, it has been a fascinating ride. First I learned that the optioning producer, Stacy Jorgensen of Jorgensen Pictures, was going to allow me to write the first screenplay. No promise that my screenplay would be the one that is eventually used, but even being asked to write the screenplay for your own work is fantastic and quite rare. Second, I found out that Stacy intended to keep me completely informed, up to the minute, as to what is going on with the project. She didn’t have to do that. Most producers do not. But Stacy is a special lady, and she’s a real pro. This has been an incredibly fun and rewarding thing, I can tell you.

So I was writing the script…

A lot of decisions have to be made along the way. Is this project right for a feature film, or is it better for television? Are we writing for a regular TV drama serial, a mini-series, or something else? If it is for a feature film, are we going to try to write it as a complete and self-contained film? Or (like with the PA novel) the first in a trilogy?  All of these formats require a completely different process.  And that’s when we ran into the reality that writer’s generally do not want to face… some books are ready made for adaptation (The Martian, by Andy Weir is an example.) They have few characters, a linear timeline, with one major story focus. These kinds of novels really only require abridging in order to bring them to the screen. Some stories (Pennsylvania being a perfect example… or, like Stephen King’s 11-22-63, now available for streaming on Hulu) are more epic in scope, involving multiple timelines, a large cast of characters, and seemingly endless options of what to put on screen. These books just cannot-cannot go straight to the screen without major adaptation. What you end up with, hopefully, is the spirit of the story on the screen. Maybe like an alternate universe relation of the story.

While all of this is going on in the virtual writing room, the Producer is out working diligently on finding partners, studios, networks interested in the project. Very few pictures of any scope get made these days without multiple partner companies involved – agencies, production companies, etc. Finding partners involves pitching the story to professionals who are in the business of finding and acquiring worthy properties.  Pennsylvania was soon being pitched at American Film Market and even Sundance, receiving some awesome feedback and interest.

After receiving some great feedback, and after we’d finished the first draft script, some bigger horizons seemed to be opening up, so Stacy brought a “story doctor” on board. A “story doctor” is a script quality expert whose job it is to evaluate stories and make suggestions on how to make them even better. Stacy got one of the best in the business. I mean big time.

I think that at this point what usually happens is the author of the original novel is dismayed and frustrated, and the Producer is torn between staying strictly faithful to the original, and doing what is probably best for the overall project even if that means ticking off the author.

Not in this case.

It is an awesome thing when everyone involved just wants what is best for the story.

That could mean total rewrites, going back and forth between a possible feature film, to a TV series, to a limited streaming series.

That could mean hiring a script doctor to completely rework the ideas of the script.

That could mean hiring a new screenwriter altogether.

The point is that it is awesome when the producer, writer, and everyone involved are willing to do what it takes to keep the project moving forward.

In the meantime, interest in Pennsylvania is skyrocketing! Just the other day, we received a cool mention in KIRKUS about the coming film/tv project: 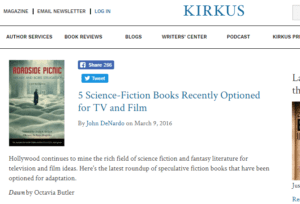 To the best of my knowledge, there’s not a whole lot of Amish sci-fi out there…but that didn’t stop Hollywood from taking notice of Michael Bunker’s space colonization story Pennsylvania. It’s the story of a young Amish man named Jedidiah Troyer who signs up for an emigration program to colonize the planet New Pennsylvania. Jedidiah is looking to establish a farm and homestead on affordable land in a new Amish community, but gets a lot more than he bargained for: he arrives at the new planet in the middle of a rebel uprising.

Film rights to Pennsylvania were picked up by Jorgensen Pictures, who brought Stacy Jorgensen (Grey Skies) on as producer. Not much more is known since this project is still very much in the early developmental stages. But that shouldn’t stop you from picking up this or any of the above books.”

To keep up with all the happenings, and to be eligible to get some cool Pennsylvania swag, make sure you are signed up to my email list!

Ok, so now on with the update. What else is going on?

Well, I signed and sold another option this past week. That’s right, another TV option. This one for an UNTITLED MICHAEL BUNKER TV PROJECT. I know what we want the show to be, and I know you’ll love it, but I can’t really talk about it much yet. I’ll just say that there are some important meetings going on that’ll let us know soon if/when the project will move forward. Be looking for more information and updates on UNTITLED MICHAEL BUNKER TV PROJECT soon. 🙂

On the writing front…

I’m supposed to be finishing the rewrite and renovation of FUTURITY as a novel. I’m doing my best, but the rest of this stuff is taking up some time. Also, I am starting to work on a second, rewritten edition of my bestselling non-fiction book Surviving Off Off-Grid. Haven’t yet decided to either totally rewrite and extend that book, or just write another companion book. We’ll see..

Anyway, I’m glad to update you and I hope you’ll stay tuned as things heat up!
Get a Signed Pennsylvania Poster!

Get a Signed Pennsylvania Paperback!