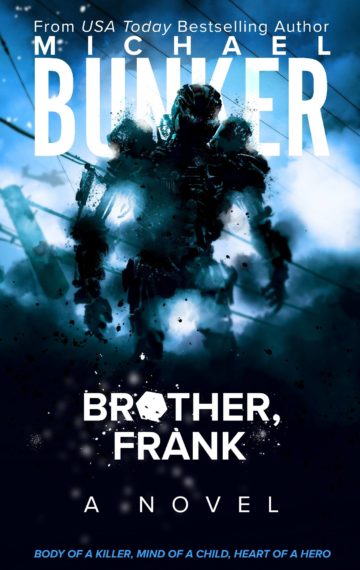 Listen to a sample
$3.99Read A SampleBuy For KindleBuy The PaperbackBuy On Audible

The HADroid was supposed to be a military grade robot with the transplanted heart and brain of a human donor that would “transform” into a devastating state of the art war machine when activated by its onboard human operator. But when the mad doctor steals the dying child of a simple Amish couple and transplants the brain and cardiovascular system of their dying eleven year old autistic son into the incredibly lethal robot the dark forces of government come looking for their investment. Dr. Alexander and the monster escape into another Amish community to hide among the plain folk while Frank, the autistic eleven year old boy trapped inside the body of the world’s most deadly robot, befriends another child who will help the prisoner inside the machine to leave the world of autism and understand what it means to be human and Amish.

But tensions arise among the plain and pacifistic yet closed minded Amish as they begin to suspect just what kind of technological monstrosity is hiding among them, and before long hard men who do the government’s most dirty deeds will come looking for a killing machine only to find a boy named Frank who has the power to defend a closed society from the worst of the world.

What Others Are Saying

“I just finished beta reading Michael Bunker’s new heartbreakingly awesome novel and I have this to say: Hugo Material.” ~ Nick Cole, bestselling author of Old Man and the Wasteland and Soda Pop Soldier.

“Brother Frank is an exciting new take on a classic with great characters and unique spin. Highly recommended!” ~ Matthew Mather bestselling author of Cyberstorm and Darknet

“Brother,Frank is Michael Bunker’s finest work yet. A novel for both the heartand the brain. The best book I’ve read this year.” ~ David Gatewood,Editor of Synchronic and Tales of Tinfoil

“…The tension between technology and agrarian simplicity runs like a bright thread through the work– those characters on the technology side are affected by the interaction with their (presumed) opposites, and those on the Amish side are changed and tested as well.” ~ Richard Gleaves, author of the bestselling Jason Crane series.

“…an intriguing and suspenseful novel. I instantly rooted for Frank…” ~ Annelie Wendeberg, bestselling author of the Anna Kronberg thrillers.

“…a fantastic story of escape and rediscovery…” ~ E.E. Giorgi, author of CHIMERAS

“A highly original tour-de-force featuring a head-on collision between the highest technology and the lowest.” –John McLean, bestselling author of the Low Carb Revolution and Zen And The Art of Stripping