***I’m not a doctor, and none of this is meant to constitute medical advice***

A character in my epic Post-Apocalyptic novel The WICK Omnibus is wounded by gunshot and, after a serious infection sets in, is treated by another character using plain white sugar.  So the question I’ve received from many readers is… would this work?

Hard to say.  No two gunshots is the same.  If the question is, can you treat an infectious gunshot with processed white sugar?  The answer is yes… and not only can you, but you probably should.

As the character Peter explains in the book, sugar and honey have been used to treat battle wounds for millennia, and many experts (unhappily, not many in America, though, where antibiotics are “god”) are coming to believe that sugar ought to be the treatment of first recourse when dealing with deep wounds that might not be absolutely “clean” throughout.  As always, most American doctors, who don’t want to think or examine the full evidence, still lean on the antibiotic crutch, even as more and more infections are being caused by antibiotic resistant bacteria.  The following quote, by an American doctor who probably has not even been willing to examine all of the evidence, is typical of that coming from American practitioners:

“…there are about 600 lotions and potions for healing wounds, and I think you can get a lot more effect with our contemporary local antibacterials.”

Many experts around the world, however, are learning that sugar not only works great (in many cases better than anything else that could be tried) on deep wounds, but that it leaves the wound cleaner, “pinker, and healthier.” 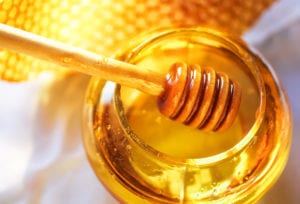 less scarring.  There is less need for debridement, and the wound readily grows back new tissue.

The process works because the sugar liquefies in the wound (think of rubbing sugar onto a ham) as it absorbs liquids from the wounded flesh.  This coats the wound and forbids bacterial infection from infiltrating it.  Then, the sugar “syrup” has an osmotic effect… it pulls moisture from infected tissue and leaves the bacteria either very dead, or weakened to the point that the body’s immune system can defeat it.  Adherents to the sugar cure claim that sugar can even be used in battle wounds that haven’t been completely cleaned or debrided.

So there is a positive use for white, processed sugar!  As Peter says in The WICK Omnibus:

“Refined and bleached sugar has a multitude of excellent uses, but eating it is not one of them.  In fact, one of the poorest uses of refined sugar is as a food substance.  It has killed more humans than Stalin and Mao combined… but it is good for many medicinal reasons, not the least of which is the fact that sugar and honey have been used as an antibacterial agent for millennia…”

Hopefully you won’t ever have to treat a deep cut or bullet wound, but now, if you are forced to do it without access to a hospital or industrial medications, you’ll know what to do!

Read More About It