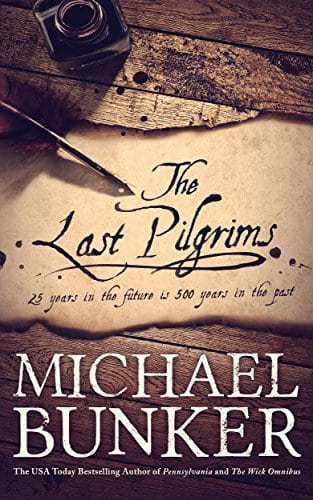 Twenty years in the future is five-hundred years in the past. It is just two decades after the worldwide societal collapse and the Vallenses, an Amish-like “plain people” living and surviving in what was once Central Texas, are under attack by the King of Aztlan and his armies. The pacifistic Vallenses are defended by the shadowy Ghost Militia and their inspiring leader Phillip, a militant freeman who wages a guerilla war with Aztlan.

Jonathan Wall and the agrarian community of Vallenses have prospered by living the simple and sustainable ways of the past. In a massively depopulated world, monarchy is back, and a corrupt kingdom arises, led by a king who cannot abide freemen on lands that he covets. Just as the Vallenses send off a plea to the benevolent King of the South States, a mysterious assassin misses his target: Jonathan Wall.

Phillip “the Ghost” is on a personal mission to save the Vallenses – even if it is against their will, while Jonathan’s own son David and his fearless teenage daughter Ruth are led to challenge their pacifistic upbringing and question whether or not the time has come for the Vallenses to fight for the land, the people, and the God they love.

The Last Pilgrims is a modern re-telling of the forgotten history of the Ancient Waldenses – simple farmers who lived in the valleys of the Alps for hundreds of years despite repeated attempts to annihilate them. Full of tragedy, adventure, humor, and love, The Last Pilgrims is a rare post-apocalyptic saga that takes history and casts it into the future, while examining that future in light of the errors of the present and the past.