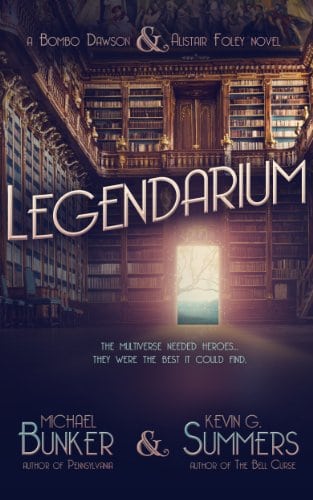 Listen to a sample
$2.99Read A SampleBuy For KindleBuy PaperbackBuy Audiobook

In every generation, certain writers are chosen to be protectors of The Legendarium, a metaphysical library that exists at the nexus of the multiverse.

Inside this library are doorways that lead to every world ever created in literature. There are forces of evil constantly at work to destroy the library and send the world back into an age of darkness. Now, in a time of growing illiteracy, two heroes are chosen to defend The Legendarium. Bombo Dawson, newly published author and the hero of Michael Bunker’s novella Hugh Howey Must Die!, and Alistair Foley, aspiring author and Bombo’s harshest critic, become unlikely partners in a mission to protect The Legendarium.

Their adventures will take them across the worlds of literature, but will hostile enemies learn to work together before the accumulated knowledge of all of humanity is lost forever?

“Legendarium is a madcap romp through some of literature’s greatest works, at times oddly genius, mixed with a hilarious dose of buddy comedy barbs and witty retorts. You’ll have a lot of fun riding along with Bombo and Alistair Foley during their adventures, but where Bunker and Summers really excel is the underlying commentary regarding the overwhelming power of literature to shape history.” ~ USA TODAY Bestselling Author Ernie Lindsey