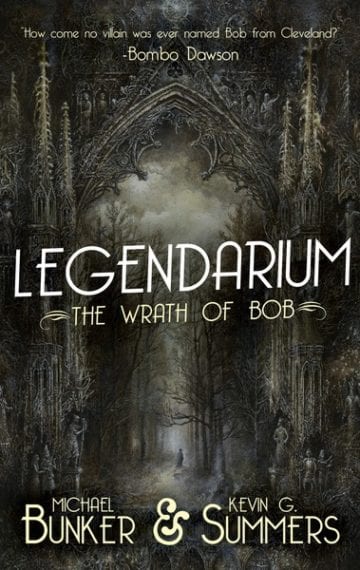 Listen to a sample
$2.99Read A SampleBuy For KindleBuy PaperbackBuy The Audiobook

Three years ago, the Legendarium, a metaphysical library at the nexus of the multiverse, was threatened with destruction, but two unlikely heroes stood up to save it.

Now a new threat has risen that threatens reality itself, and only Bombo Dawson and Alistair Foley can stop it. Can these two frenemies manage to work together long enough to save the Legendarium a second time or will the world be cast into a dystopian nightmare for all time?

Find out in Legendarium: The Wrath of Bob.

What Others Are Saying

“…irreverent and clever, satirizing mb-pennanything and everything from popular culture and classic literature. From Star Trek to wrestling to Russian literature to western romances, EVERYTHING of Green Gables, Twitter shaming, Goodreads trolls, book reviewing and falling in love within ten minutes of meeting someone and so much more. No subject is too serious for the authors to poke fun at it.” The Indie Athenaeum